Context: The Cauldron of Change

1970s:  Richard Nixon is President. Los Angeles is recovering from a large earthquake and the nation is struggling with the undeclared war in Vietnam. In May, 12,000 people are arrested in our Nation's capital protesting the first anniversary of the Kent State killings and the "peace action" in Vietnam. The U.S. Supreme Court rules for the first time that the Fourteenth Amendment prohibits differential treatment based on sex. Take Back the Night Marches begin happening. On the 50th anniversary of women's suffrage in the U.S., tens of thousands of women take part in the Women's Strike for Equality, organized by Betty Friedan. We are beginning to see art, hear music and poetry, read educational theses, and be fired up by public speakers inspired by feminist values and Goddess images. Woman like Judy Chicago, and those of blessed memory...Shekhinah Mountainwater, Merlin Stone, and Kay Gardner...give us inspiration and courage. The academic work of Marija Gimbutus in the field of archaeology is reaffirming the knowledge of our ancient mothers that we already know deep in our bones.

Winter Solstice 1971, Hollywood: The first modern-day Dianic ritual is led by Zsuszanna Budapest for the Los Angeles women's community. We are on a cusp of change. The wheel is turning and emotions are high. The need for change is strong, and we are pouring all of that need, all those emotions, into the center of our circle. We are strong, mostly lesbian women, and together we are making strong magic. The cauldron bubbles and out of the steam is rebirthed the Dianic tradition, as a goddess- and female-centered, earth-based, feminist tradition of Wicca, as the Susan B. Anthony Coven #1.

Between 1976 and 1980:Ruth Rhiannon Barrett, Cerridwyn RoseLabrys, Patricia Devin, and Lhyv Oakwoman are among the women initiated by Z into Susan B. Anthony. We are becoming powerful.

Hallowmas 1980: Ruth is ordained as High Priestess by Z, who is preparing to move to Northern California. Ruth is charged with continuing Z's vision in Los Angeles. Ruth is the second woman to be ordained by Z as a High Priestess, the first being Kay Gardner. Ruth is only 26 years old and had not even been ordained as a Priestess prior to this! We embrace change and maintain our growth.

January 1981: Moon Birch Grove rises from the cauldron's steam with Ruth as High Priestess. We keep on learning and developing our own unique form of paganism. Information about the Goddess and Dianic Witchcraft is more available. More heterosexual and bisexual woman are attracted to our Goddess-centered, feminist traditions. We are really rising now!

1988: Ruth is co-founds Circle of Aradia (COA) with another former Moon Birch Grove member, Felicity Artemis Flowers. Ruth chose the name Circle of Aradia to honor Aradia, who in the Old Religion was sent to earth to teach Witchcraft to the oppressed so they could free themselves. COA begins offering classes in the Dianic tradition, as well as seasonal and lunar community rituals to the woman of Los Angeles. COA soon becomes the largest Dianic community in the United States. COA's "action circles" come together to teach classes, honor women's mysteries, facilitate public ritual, and work for political change and an end to patriarchy. For the good of all, may patriarchy fall! We are expanding, and some of our rituals bring together upwards of 230 women!

1993:Ruth incorporates COA as a non-profit religious organization in the State of California. By this time, Ruth has developed a curriculum of classes and workshops in Dianic ritual and magical practice. She follows this with federal incorporation under thel umbrella of the Re-formed Congregation of the Goddess, a women's spirituality organization located in Wisconsin. We have come a long way.

Winter Solstice 1996: COA produces the celebration of 25 years of the Dianic Movement in Topanga Canyon. This evening of Herstory, ritual and feasting features many special guests, including Z Budapest, Lhyv Oakwoman, Annu, Star Goode, and Jean Freer. It includes original members of Susan B. Anthony Coven #1. Also in attendance are many women from Moon Birch Gove, C.O.M.M.A, Nemesis, Re-Formed Congregation of the Goddess, Woman Mysteries of the Ancient Future Sisterhood, Long Beach WomanSprit, and Iceam of Isis Pelagia. Facilitators include future High Priestesses Letecia and Cerridwyn.

2000: Ruth relocates to Wisconsin with her future spouse, Falcon River, and ordains Letecia as High Priestess for COA. In Wisconsin, Ruth and Falcon co-found Temple of Diana, Inc. a national and federally recognized Dianic temple. COA leaves Re-Formed Congregation of the Goddess and becomes a grove of Temple of Diana. We continue to have wonderful public rituals. We are stretching, growing, and embracing change.

2007: COA says goodbye to High Priestess Letecia, who leaves COA to pursue her spiritual growth in a different direction. COA is without a High Priestess, and we look to Ruth and Temple of Diana, Inc for guidance. COA leaves Re-Formed Congregation of the Goddess and becomes a grove of Temple of Diana, Inc. We continue to hold public rituals, but attendance begins to fall away, as the economic recession hits hard and women find other avenues to the Goddess closer to home. We circle together to find a solution.

2009, Our Solution: We choose three women to hold center. A trine, like the maiden-mother-crone. Three womyn will take on the work of re-visioning Circle of Aradia. Together, we empower Lyena, Sara, and Cerridwyn RoseLabrys as our Trine. The trine sisters will serve for a year and a day as an exciting experiment in leadership. It is an event-filled year. At the end, Sara steps down to allow herself time to recover from surgery and pursue her education. Lyena steps down to concentrate on conception, and Cerridwyn steps forward as Convening Priestess. 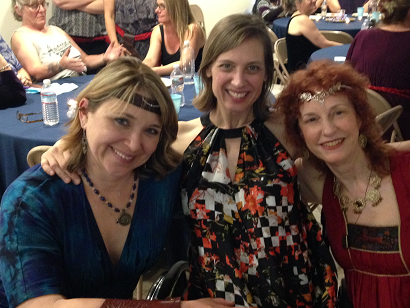 June 19, 2010, at COA's Business Circle meeting: Cerridwyn RoseLabrys is nominated as High Priestess of Circle of Aradia, pending approval of the COA community. Cerridwyn has been serving the Dianic community in one way or another for 37 years. We are thrilled when Cerridwyn is accepted with open hearts by all, and we begin plans for her Ordination. 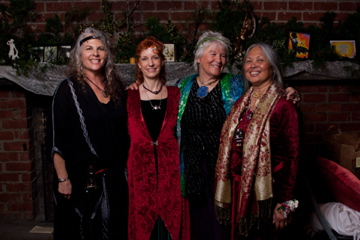 Winter Solstice 2011: We realize that ordaining Cerridwyn at  the 40th Dianic Anniversary is a perfect vehicle to tie the past 40 years to the future of COA, and to build bridges between all the Dianic groups that have formed in the last 40 years. COA produces the 40th Dianic Anniversary Ritual and Celebration. This night, we ordain Cerridwyn RoseLabrys as COA's new High Priestess. We also ordain Medea Wolfe, a Michigan Temple of Diana Priestess as a High Priestess, building those bridges to our sister groves and symbolizing the tying together of East and West, of Circle of Aradia and The Daughters of the Silver Crescent Temple, under the auspices of Temple of Diana, Inc.

As we've moved along this time continuum, women weave in and out, and sometimes back into our community. We have seen the birth of several Temple of Diana, Inc groves throughout the county. Z has continued her work in Northern California, and has ordained many priestesses, some of which have founded their own Dianic communities.

In August 2014, Z ordained a man. This change resulted in a branching off of Temple of Diana, Inc. and all her groves, including Circle of Aradia, as well as other Dianic groups and individuals. This new branch continues the unique vision of a tradition entirely by and for women and girls; we do not ordain men.

COA continues to offer to classes and public rituals to female-born women following the Dianic wheel of the year, the mythic cycle of the Goddess found in the seasonal earth cycles of birth, death, and regeneration. This cycle is reflected in each woman's own transitions through her life cycle. We honor and celebrate the various physical, emotional, and life-cycle passages that all women share, by virtue of having been born female. We maintain a safe, female-sovereign space for all girls and women who wish to celebrate with us the Dianic wheel of the year.
For another perspective on the history and development of the Circle of Aradia, see Re-riting Woman: Dianic Wicca and the Feminine Divine, by Kristy S. Coleman.